My Workaround For DRM Game Issues

I had mentioned in a previous post about having issues with DRM on Windows 10. Well, I found a workaround that works well. VirtualBox and Windows XP Pro SP3. So yeah, it's not supported anymore but it works. In fact Windows XP Pro runs like a scalded dog on a 2.5Ghz machine.

To do this, first install VirtualBox. I used the one from Oracle and it works just fine. I then downloaded a Windows .iso that I installed on VirtualBox. That install (guest) will read the CD/DVD drive and a USB stick so software installs are a snap. XP Pro running on the right display, 800 x 600 at 150% scaling. Looks better than the old CTR tube displays of yesteryear. 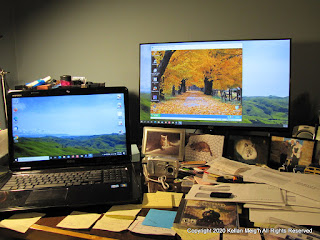 So far, I've not had any problems with the install and I also loaded Linux Mint-Cinnamon 20 and Ubuntu 20.04 as virtual machines. The Linux Mint runs very smoothly but the Ubuntu has issues. I might want to try Ubuntu 18 to see if it runs any better. Have not been able to install Wine on either distro due to not giving them enough 'virtual' hdd space.

To load the USB stick with an .iso, I have been using Rufus portable 3.12 for the loader. There are numerous sites on the Intarwebs to tell you how to do the deed and the one YouTube video that shows how to load XP Pro has a link to an .iso and the key for it.

Well, that's all for now.